Oppo Realme 1 vs RealMe 2 : Which is the Best RealMe Smartphone under ten thousand ?

The Independent Company RealMe has been launched its second smartphone, called RealMe 2 . It has been launched with an aggressive price. But now the question arises, which is the best between Realme 1 and Realme 2 ?
Today, this article will clear your all doubts for the same. So, I will share the full specifications, features and price comparison between Oppo Realme 1 and RealMe 2. Let’s get started ! 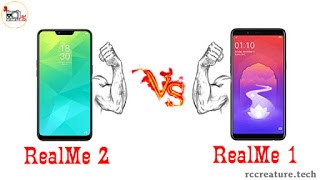 Oppo Realme 1 has a 13-megapixel rear and 8-megapixelfront camera.
Realme 2 has 13 + 2 dual rear camera. At the same time, the selfie is equipped with an 8 megapixel camera.
In Realme 2 you get a dual rear camera, which gives more stable photos. If photography is your first choice, then Realme 2 can become your first choice.
The Winner : RealMe 2
Also Read : Nokia 6.1 Plus : Can it compete with Mi and ASUS ? See Full details here !!

Oppo Realme 1 is powered with 3410 mAh battery. At the same time, 4230 mAh of battery is equipped in Realme 2.
If you want to use the phone for a long time playing high graphics games or for long time movie watching on it, then Realme 2 is the best choice for you.
The Winner : RealMe 2
Also Read :What is the top 5 best Important features of Android 9 (Pie) ? Google Android P Launched !

Smartphone companies are launching their smartphones with more aggressive and decent price in India. Like other companies, RealMe Company was also launched its awesome budget phone with affordable price. But sometime, we got confused when we go to purchase a smartphone of the same company . So, in this article, I shared a brief and complete comparison regarding specifications, features and price between Real Me 1 and Real Me 2 smartphones. Hope, you have enjoyed very much. Thanks for reading till last.