Xiaomi Poco F1 has been launched in India. The company has introduced its own phone in four variants. Its biggest feature is to give Snapdragon 845 processor for its Rs 20,999. Apart from this, large screens and strong batteries make it different from other smartphones.

After launching the Xiaomi Poco F1 smartphone in India, one question arises that can Xiaomi POCO F1 compete with OnePlus, ASUS and Huawei ?  So, let’s know about the features and price of these four smartphones such as POCO F1, ONEPLUS 6, ASUS ZENFONE 5Z AND HUAWEI NOVA 3 . 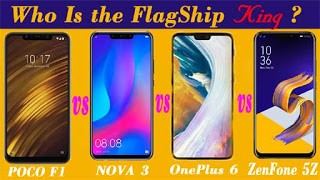 Huawei Nova 3 has a 6.3-inch Full HD display, with a screen resolution of 1080×2340 pixels. The aspect ratio of the phone is 19.5: 9. Its processor runs on the Octa Core High Silicon Kirin 970. Its storage can be increased to 256 GB via micro SD card. Its operating system works on both Android 8.1 and EMUI 8.2 . For photography, it has 16 megapixels and 24 megapixel dual rear camera. At the same time, you get 24 megapixels and 2 megapixel dual front camera for selfie. All the phones on the phone work on Artificial Intelligence. It has a 3750 mAh powerful battery.
Price: Huawei Nova 3’s 6GB RAM and 128GB storage variant is priced at Rs 34,999.

Asus ZenFone 5Z has a 6.2 inch full HD Plus IPS plus display. Its screen resolution is 2246 x 1080 pixels. At the same time, its aspect ratio is 19: 9. Its processor runs on Qualcomm Snapdragon 845. The phone works on the Android Oreo operating system. The storage of the phone can be increased from microSD card to 2 TB. Speaking of its camera features, it has a 12 megapixel Sony IMX363 image sensor. On the secondary camera, there is a 8-megapixel 120 degree wide angle sensor. It has an 8 megapixel front camera for selfie photography. All the phones on the phone work on Artificial Intelligence. For power, it has a battery of 3300 mAh.
Price: Asus ZenFone 5Z 6GB RAM and 64 GB storage variant is priced at Rs 29,999. At the same time, the price of the 6GB / 128GB model is Rs. 32,999. However, the cost of 8GB / 256 GB variants is Rs 36,999.