RealMe 2 : Is it really the Budget Killer ? See Full Comparison between Realme 2, Honor 7A & Redmi Note 5 !

Realme launched its second smartphone in India yesterday, namely Realme 2. Compared to its forerunner the Realme 1, the new Realme 2 brings much more important upgrades that were missing in the first smartphone.

In budget category, the Realme 2 will be competing with Honor 7A & Xiaomi Redmi Note 5.So, here in this article, I will compare the specifications, features & price of these three smartphones.

Realme 2 vs Honor 7A vs Xiaomi Redmi Note 5: Price, Specifications and Features Compared 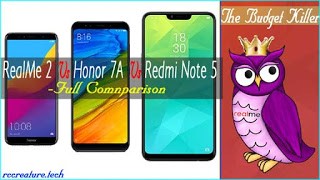 The Realme 2 is powered by a Qualcomm Snapdragon 450 octa-core SoC built on 14nmprocess.

The Redmi Note 5 is powered by the Qualcomm Snapdragon 625 octa-core SoC built on the 14nm process.

The Realme 2, Honor 7A and Redmi Note 5 come with their respective custom skins on top & for security, all three smartphones come with a fingerprint scanner, and face unlock feature.

The Realme 2 and Honor 7A come with the same dual rear camera setup i.e, 13 MP + 2 MP . The front camera of both the smartphones, equipped with a single 8 MP camera for selfies.

The Redmi Note 5, on the other hand, comes with a single 12-megapixelsensor at the back, and a 5-megapixel sensor on the front.

The Realme 2 comes with a higher capacity 4,230mAh batter.

The Redmi Note 5 has a slightly smaller 4,000mAh battery.

On the other hand, the Honor 7A comes with the smallest battery rated at 3,000mAh. In terms of connectivity, all smartphones come with dual-SIM card slots, 4G LTE with VoLTE connectivity, GPS, Bluetooth, and microUSB connectivity.