If you want to buy a good smartphone in the budget range in this week or month, then this article can be useful to you. I am going to tell you about the features and pricing of Oppo A3s, Oppo Realme 1 and Xiaomi Redmi Y2 smartphones which are trending in budget category this month. So that you can choose the smartphone of your choice. 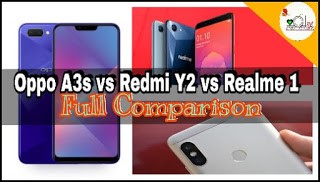 So, in this case, Oppo A3s is clearly winner !

Oppo A3s has 2 GB of RAM and 16 GB of storage. The phone’s storage can be increased to 256 GB via micro SD card. The phone runs on the 1.8GHz Octa Core Snapdragon 450 processor. The phone works on Android Oreo 8.1 operating system.

Xiaomi Redmi Y2 runs on Qualcomm Snapdragon 625 processor. The phone is available in two variants of 3/4 GB RAM and 32/64 GB storage. The phone’s storage can be increased to 256 GB via microSD card. The phone works on Android 8.1 Oreo.

So, in processor case, I think RealMe 1 is winner as it’s so powerful chipset that optimize better than other though other two have Qualcomm chipsets.

Oppo A3s has 13 megapixels and a 2 megapixel dual rear camera. While the front is equipped with an 8 megapixel camera.

Xiaomi Redmi Y2 has a 12 megapixel and 5 megapixel dual rear camera. While the front is equipped with a 16 megapixel camera.

Oppo Realme 1 has a 13-megapixel rear and 8-megapixel front camera.

Here, the winner is Xiaomi Redmi Y2! Thanks to  AI . Its bokeh/portrait shots are pretty good what I like most . So, in my opinion, It’s the best camera phone in budget category right now !

However, Xiaomi Redmi Y2 has 3080 mAh battery for power.

The winner is Oppo A3s ! As it has a massive battery of 4230 mAh . Isn’t it right ? Comment below your thoughts!

So friends, I shared a comparison article about Oppo A3s, Redmi Y2 and Realme 1 specifications and features. In these phones, all are better than other. So, It’s your choice what you like most for buying a smartphone. Thank You for reading till this.

Mr Ram Sahoo, the Founder of RC CREATURE,is a Tech Enthusiast . He loves writing Technology Articles so much. He has more than 2 years experience in Blogging field. You can connect with him directly here !
Facebook
Twitter
Youtube
Linkedin

RC CREATURE is a Digital Marketing Agency-cum-Institute, located on Anandapur, Odisha. Moreover, we produce a lot of Contents on Tech, Finance & Blogging Topic!