HMD Global has launched Nokia 6.1 Plus and Nokia 5.1 Plus smartphones in India.The company thanked its team, fans, users and partners. In this article, we will just discuss Nokia 6.1 Plus specifications, features , & price in India . So, let’s start ! 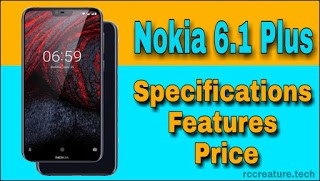 Nokia 6.1 Plus is priced at Rs 15,999. This price is of its 4 GB RAM and 64 GB storage variant. Its first sale will start from August 30 in India . Pre-order for this phone will start on Flipkart and Nokia.com/Phones from today.

Nokia users want to give the best experience. Because of this, the company has given better specifications in the phone while looking at the users. Speaking of Nokia 6.1 Plus, this phone is equipped with Qualcomm Snapdragon 636 processor. This is 40 percent faster than before. At the same time, it is also better in terms of power consumption. It is 50 percent power effective when listening to music. At the same time, watching 20 percent of the movie is effective. It has 64GB of internal storage which can be extended up to 400 GB via MicroSD card. In addition, this phone works on stock Android 8.1 Oreo.

I really appreciate this smartphone as it comes with Qualcomm Snapdragon 636 which is a powerful chipset. But, I am little bit unhappy for that its price is too much over. If it priced at Rs 14000 according to its specifications, then it might be changed the Indian Market with a new revolution as there has already two company Mi & ASUS, launched their smartphone with same chipset at a decent price. Hope, HMD will look into this in future. Thank You !!